With a 48% fall in export credit agency (ECA)-backed buyer deals across the board in 2016 compared with 2015, according to TXF Data,1 it is only too easy to lose sight of the transformational impact of these transactions on the countries, communities and economies in which they take place. Export credit agencies came into their own during the 2008 global financial crisis, stepping in with increased trade finance support when commercial bank liquidity was at a standstill. ECA activity continued to build and they, as Alexander Malaket puts it in his book, Financing Trade and International Supply Chains (Gower, 2014), “now exhibit a wide range of mandates and operating models, as well as a wide spectrum of financing, risk mitigation and other products and solutions, supporting the international activities of small businesses, mid-corporates and global multinationals”.

2016 was a tough year all round, with reduced investor appetite for capital investment – even with ECA support. In addition, the adoption of Basel III regulation by banks had an impact on availability of capital for long-term deals (and infrastructure financing generally is medium-to-long term) and a move from some banks out of what was a ‘book and hold’ approach to the current ‘originate to distribute’ model. In other words, origination of transactions and then distributing them is a characteristic of many of today’s structured trade finance deals because of increased costs in holding capital against deals on the balance sheet.

In addition, as ECAs have continued to evolve, the political perspectives that shape the mandates and activities of a national ECA, together with the supply and demand of machinery, equipment and materials for infrastructure projects (power in Africa being a huge proportion of 2016 activity) have meant that banks financing these deals have highly specialist experts, well versed in international relations, project management, and logistics, in addition to the normal risk management sense checks in doing these deals.

Our business has a social impact, it is client orientated, developmental and a rewarding place to be

Headed by Simon Sayer, the Deutsche Bank Structured Export Finance team has been financing infrastructure in emerging economies for more than 15 years. Their pride in their deals partly lies in seeing how their projects come to fruition and change the lives of people and businesses in local communities. “Our business has a social impact, it is client orientated, developmental and a rewarding place to be,” says Sayer.2

A big driver of export finance demand has been the emergence of poorer countries out of poverty as they put in place infrastructure – and other countries tackling the aftermath of natural disasters. Ecuador happens to be both.

Healthcare and education in Ecuador 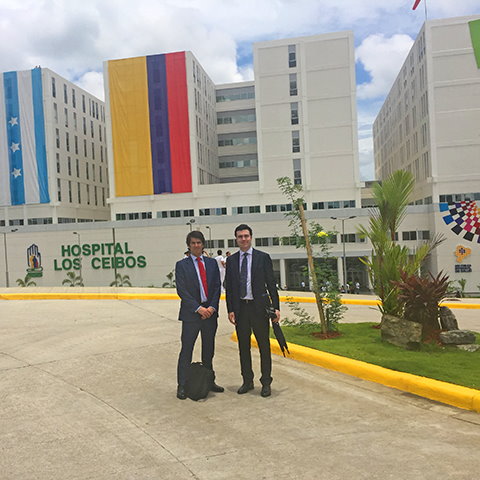 The Ecuadorean economy is the eighth largest in Latin America, and is heavily dependent on export commodities such as crude oil (representing 40% of exports), bananas (of which it is the world’s biggest producer), flowers, cocoa, shrimp and fish products and many other foodstuffs. Reduced oil revenues because of the fall in oil prices, a lack of local currency and limited fiscal savings has forced the government to reduce public investment and curb spending.

Vulnerable to earthquakes because of the country’s tectonic setting, disaster struck Ecuador on 16 April 2016 in the form of a 7.3 magnitude earthquake in the Esmeraldas province, 170km north-west of the country’s capital Quito. Around 670 people were killed and a further 16,000 injured. Then-President Rafael Correa (who was succeeded by Lenin Moreno in the April 2017 election) put the damage at around US$3bn and raised US$2bn of credit from the World Bank, the Inter-American Development Bank and other sources (including private sector project finance).

With the country in chaos, urgent reconstruction – to building standards that would be better protected against future tremors – of essential infrastructure got under way, with hospitals being a priority. Deutsche Bank has had a strong relationship and extensive track record with the republic of Ecuador for more than 25 years and was one of the banks that stepped in to help.

On 28 July 2016, the bank’s Madrid STEF team signed two deals totalling US$78.3m with the Instituto Ecuatoriano de Seguridad Social (IESS) – the Ecuadorian social security and health provider – for the partial financing of the construction and equipment of two hospitals in Guayaquil and Machala. The success of these two deals led to a third hospital transaction, signed on 22 May 2017 for US$47m.

In Guayaquil, the 450-bed hospital was built by a consortium formed by Puentes y Calzadas Infraestructuras SL (Spain) and Sinohydro Corporation Limited (China) for a total project cost of US$200m. Inaugurated at the end of March 2017, this is Ecuador’s largest hospital in terms of infrastructure size, technology applied and medical specialties provided. Ever since then, more than 24,000 patients have been seen. Sinohydro also teamed up with Makiber SA (ACS Group, Spain) to build a new second-level hospital comprising 120 beds and replacing a 45-year-old, 62-bed hospital. These two hospitals have doubled the pre-existing infrastructure capabilities with more than 40,000 outpatient treatments and 45,000 emergency treatments since then.

Deutsche Bank acted as agent, mandated lead arranger (MLA) and lender with Société Générale Sucursal en España, Banco Santander, BBVA and Banco Popular as MLAs and lenders. With IESS as the borrower of the financing, the Republic of Ecuador represented by the Ministry of Finance acts as guarantor. The deals were structured through an eight-year door-to-door buyer credit from Spain’s export credit agency, CESCE. The third deal in Quito followed a similar structure, with two other banks forming part of that club deal.

These hospitals have delivered a significant positive impact for Ecuadorians, who have seen their access to quality healthcare improved in the aftermath of the earthquake. Correa himself – still as President of the Republic – chaired the inauguration of both Guayaquil and Machala hospitals, where some affiliates had the opportunity to explain how IESS hospitals had changed their lives. “It is very moving to hear about these experiences, as we can realise that our work has a real impact on society. Absolutely inspiring and motivating, this is what we like most about our job,” says STEF Madrid’s Jürgen Ziegler, who leads the relationship with IESS and the Ministry of Finance of Ecuador. In addition, CESCE highlighted these transactions within its 2016 Activity Report.

While the hospital reconstruction demonstrates Ecuador’s response to natural disaster, it has supported sustainable development and poverty eradication along with other UN member states as part of the Millennium Development Goals agenda signed in 2000 at the turn of the 21st century. This momentum of finding a blueprint to balance human prosperity with protecting the planet was continued into the current Sustainable Development Goals (SDGs) adopted by all 193 UN member countries in September 2015, The agenda is a universal, integrated and mutually reinforcing plan that comprises 17 SDGs and 169 targets, all to be met by 2030. Education is, says UNESCO in its 2016 Global Education Monitoring Report, “crucial for disaster preparedness. If education progress is stalled, it could lead to a 20% increase in disaster-related fatalities per decade.”3

The same report points out that Millennium Goal 2, which called for all children to receive a full course of primary education by 2015, was met by only 64 of the 157 countries that had committed to this. Ecuador was forecast to achieve this by 2050, before 33.3% of the world (so it is a relative latecomer).

However, Ecuador has undergone a programme of replacing the old educational system with ‘Millennium Educational Units’ (UEM). There are around 55 of these in operation at the moment, and Ecuador’s goal is to increase this to 300 by the end of 2017.

In February 2017, Deutsche Bank’s STEF China team, together with the Bank of China, closed a US$167.4m, 12-year financing deal to support the construction of a series of Millennium Schools by China Railway No. 9 Corporation under an EPC contract signed with the Ministry of Education of Ecuador, guaranteed by the Chinese export credit agency, Sinosure. This is the fourth repeat deal in partnership with the Chinese bank under Sinosure cover.

Daniel Qian, the Deutsche Bank head of the medium- and long-term business in China commented: “After supporting the construction of a flood control project in 2013 and two highway projects in 2014 and 2015, which all significantly contributed to the improvement of public infrastructure in Ecuador, the successful conclusion of this fourth transaction with Ecuador MOF is also a strong testimony to Deutsche Bank’s commitment to making positive impact to the real economy and its clients by delivering long-term structured financing.”

Register for flow Register to
receive flow
magazine
in print